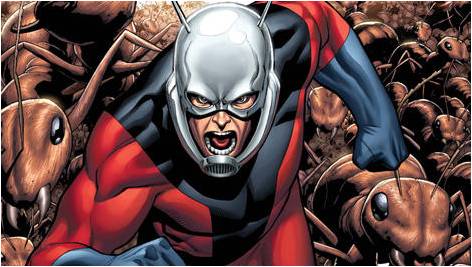 It is no secret that Marvel are currently filming one of their next projects, Ant man. Henry Pym .A.K.A Hank Pym first appeared in 1962 as a scientist in his own 7 page special in Tales of Astonish #35. In this issue he had perfecting a chemical that can shrink anything when he accidentally spills some on himself making him shrink. In this issue he also learned that he has a mind control power over ants and in the very same episode restores his size with a counteracting chemical.

He would later adopt a partner called Janet Van Dyne who’s father was a colleague of Pym but died tragically. She became his partner and the two eventually became lovers. As you may be aware, there are many universes of MARVEL, in one Dr Pym becomes an abusive husband who accidentally murders his wife in a fit of rage of alcohol to add to the mix. His wife also has the power to fire small stings at people.

It is well known however that Dr Pym can also make himself become a giant, and has adopted the name Giant man, Goliath and when he lost his sanity Yellow Jacket. He and Jan would become the founding members of the Avengers and would have a daughter called hope. Dr Pym is also the creator of Ultron, who will be the villain in the next film.

Actor, writers and such

Henry Pym will be played by Michael Douglas (Falling down, Basic Instinct and Last Vegas), however there is no word on his beautiful wife. His daughter Hope will be played by Evangeline Lilly (Lost, The hurt Locker and The Hobbit).

An interesting development is that Scott Lang – the second Ant man will also be featuring. He was a thief and stole Ant man’s equipment so that he could save his daughter Cassie who was suffering from a heart condition. He will be played by Paul Rudd (Anchorman, Friends, the 40 year old virgin and Role Models). What’s more, Corey Stoll (Non-Stop, Midnight in Paris and The Bourne Legacy) will be playing Hank Pym’s alter ego Yellow Jacket.

(Left) Evangeline Lilly and Paul Rudd (right) from her instagram

All these three dimensional characters and their story lines are making for a thick and juicy film. It will also be staring Judy Greer (Jurassic World, Dawn of the planet of the apes and Love and other drugs), John Slattery (Iron man 2 and Mad men) and Bobby Cannavale (Win win and Chef).

It will be written by Andrew Barrer (Haunt), Gabriel Ferrari (Sebrina the teenage witch) and Adam McKay (Step Brothers, Anchor man and the other guys), based on the comics by Jack Kirby, Stan Lee and Larry Lieber. It will also be directed by Peyton Reed (Yes man and the break up).

The plot of the film is quite different to the comics. Where as in the comics Dr Pym decides to become a superhero with his technology and thief Scott Lang steals it, Dr Pym instead hires a thief to look after his size changing technology and to become a superhero to save the world. However, it is unclear whether Dr Pym’s ant controlling/ communicating helmet will be featured. On the plus side, since they’re hiring a second actor to play Yellow Jacket it does suggest that Dr Pym’s interesting psychological fall will be featuring making for an interesting film. It will be released on the 5th November 2015 after the avengers film.

How to increase the RAM in a Chromebook
Next