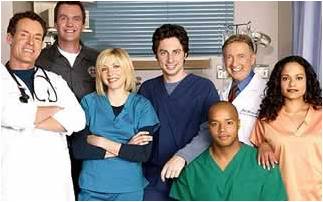 In 2001, a TV series was aired about an intern in general medicine called John Dorian – J.D. (Zach Braff – Chicken Little and Oz, the great and powerful) working at the same hospital as his college room mate Chris Turk (Donald Faison – Skyline and Kickass 2). JD also has an on again off again relation ship with fellow intern Elliot Reid (Sarah Chalke – How I met your mother and Chaos Theory). He would also be tormented by Janitor – known as Janitor (Neil Flynn – The middle and the Fugitive) and Mentor Dr Perris Cox (John McGinley – The rock, are we done yet). Turk also tries to find romance with nurse Carla Espinosa (Judy Reyes – Little Girl Lost: The Delimar Vera Story and Devious maids).

It was a well beloved comedy set in the hospital Sacred Heart, which was announced to end in 2009 when DR John Dorian was leaving to be a doctor at another hospital, and was looking forward to his relationship with Doctor Elliot Reid and imagined that one day they may get married and have children. Turk did marry Nurse Espinosa and have children and even became the head of surgery in the hospital, the janitor remained as Janitor and Dr Cox took over running the hospital from Dr Bob Kelso (Ken Jenkins – The abyss and The sum of all fears).

However, the TV show did come back in 2010 told from the point of view from a new intern’s perspective, who was a female equivalent of JD. She too had her share of dysfunctional colleagues, and the hospital had a complete make over making it unrecognizable. Dr Dorian returned for a short period before leaving again, but he was indeed married to Dr Reid and were expecting. However, as you can expect the show was unsuccessful due to the huge and unexplained change in the hospital making the show unrecognizable. There was no mention of what became of the Janitor since series 8. It was generally disliked.

Recently, rumors have been sturing that the show may be making yet another come back, not just on the TV but also in films. However, the writer Bill Lawrence said that these accusations were false. However, he is currently writing a stage production of the show in a musical format.

Fans of the show have found this disheartening, however, it is not the last time that we’ll see comedy partners Donald Faison and Zach Braff working together. They are both featuring as best friends, yet again in the film ‘Wish I Was Here’ which is set to be reaching cinema’s soon.

Wish I Was Here?

Zach Braff plays family man Aidan Bloom who is forced to examine his life, family and career in what is a highly anticipated comedy. Aidan will look back on his life in the hope to find an epiphany to over come this crossroads that he has encountered, as well as to show his daughter and son what it was like for him growing up (the different challenges that his generation had to face).

Top 5 revolutionary games of all time
Next