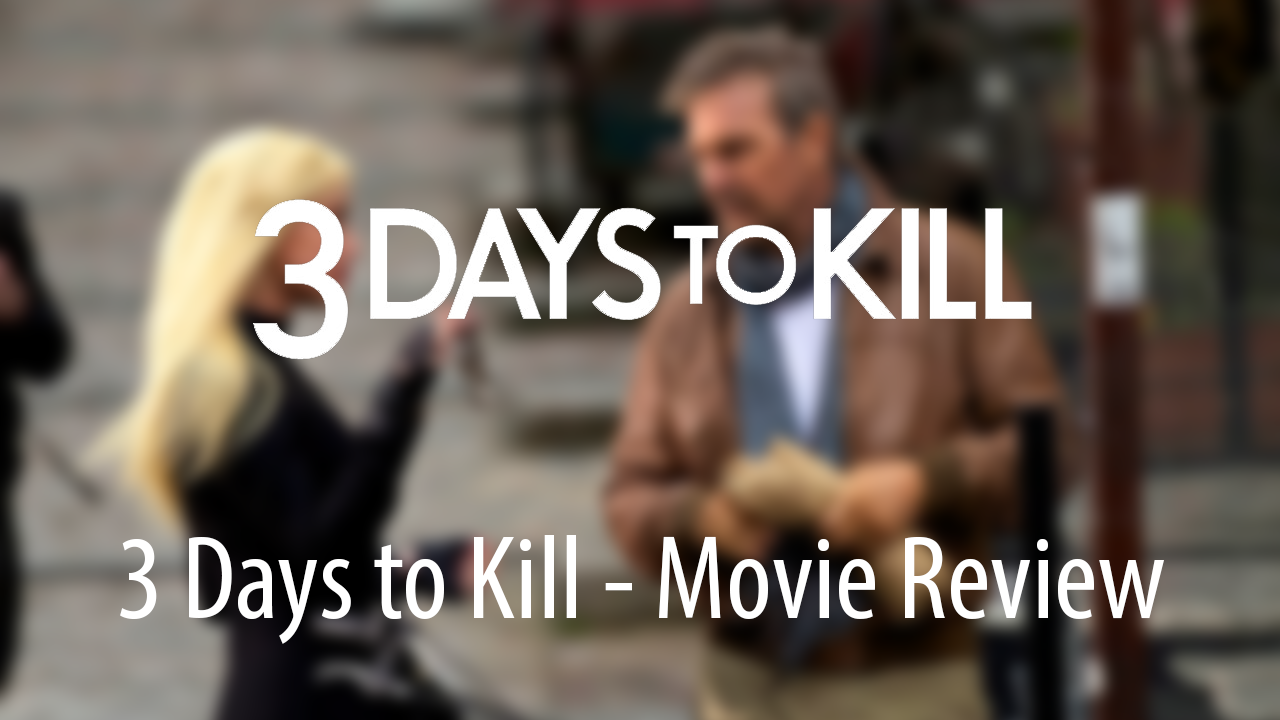 3 Days to Kill epitomises the sub-par action films of today. It’s overcome by sloppy, laughable dialogue and has one of the weakest family orientated plots I’ve ever seen on the big screen. It all feels like a cheaper ‘Taken’, the only difference being that this film is injected with bits from ‘Crank’. It’s a dull, incomprehensible film. This film is so off balanced that it felt like it had two directors. In its entirety, 3 Days to Kill is the worst film of 2014 so far and is a shoddy piece of filmaking.

Kevin Costner, yes Kevin Costner, plays a CIA agent whose recruited by a mysterious woman to kill for her; the reward being a serum which prevents his illness thus making him live longer so he can spend more time with his family. I wish this character wasn’t given this opportunity as the film wouldn’t have existed. I wouldn’t even call this the ‘plot’ of the film because I’m not too sure what the plot even was. At times I understood what was going on, but the film digressed and took a wrong turning down a dark path. The ‘plot’ was meant to combine both aspects; family and action. But it failed horrendously and the product is a film that is incredibly family oriented VS an action romp that does have decent action sequences. To put it nicely, it’s confused. The humour is off-balance and the action is misplaced, this leads to a very jerky cinematic experience that lacks any cohesion whatsoever. There was nothing binding this film together, if anything the forgettable performances fragmented the film even more. I’m not too familiar with Kevin Costner’s works but seeing a couple of his films made me realise he is a decent actor, after seeing this I retract that statement. But in all honestly I don’t blame him, I blame the tenuous script that gave Costner no room to act. 3 Days to Kill solidifies the view that action films have taken a dive for the worst – a ‘good’ action film is very rare. They all suffer from the same defect, a ridiculous family element and a cheesy script. The issue with 3 Days to Kill is that these defects stick out like a sore thumb.

I don’t see the appeal of an incessant family dynamic in modern films. They all just do not work. No character in this film is worth mentioning as all the characters are tragic and all the performances are abysmal. No one did a good job and I said before this isn’t a criticism of the actors, its a criticism of the restrictive material the actors were given to work with. The first ‘Taken’ hit the nail on the head with its depiction of a brutal father seeking his daughter. This film attempted to lift ‘Taken’ material and insert it into this film, this didn’t work whatsoever. ‘Taken’ worked because it was an 18 and pushed it to the limit, we enjoyed the violence as a family orientated audience. This films too soft-core, it’s incredibly mellow and shy to show true grit. This is truly bizarre as the film indulges in soft core torture and on one bizarre occasion – porn. But ‘real’ action is nowhere in sight. Do not get me wrong, this film does have well-shot action but its not gratifying and I just didn’t care for anything happening on screen. Believe it or not, but a Peugeot racing through Paris does not get me excited, if anything I cringe at the feeble attempt to excite the audience as I wished their they had more production money so they could have got another car instead of a Peugeot. This film should not be allowed to be categorized as an action film as the action isn’t even executed well. There are odd moments here and there when I though; yeah that was good. But I felt this a total of two times in a 120 minute long film. This brings me on to the next issue, this film lingered around too long. It felt like an eternity watching this film an that is purely because it is bloated with nonsense, a good 45 minutes could have been trimmed from this film and that may have made it better.

3 Days to Kill is an insult to action films. Aside from one or two well shot action sequences the rest of them are bland, mindless and depraved of energy. Nothing interesting happens and the attempt to establish humour is abysmal. Nothing funny happens within the film, but the film is so bad it’s funny. I’m not sure if this film is forgettable because it was a very uncomfortable viewing experience.