Must Read:iPhone 7 – What we know so far
Sections
Now Reading
Top 5 TV Shows – Based on lowest average of viewer’s income
NextPrev
Contents
100 50
1 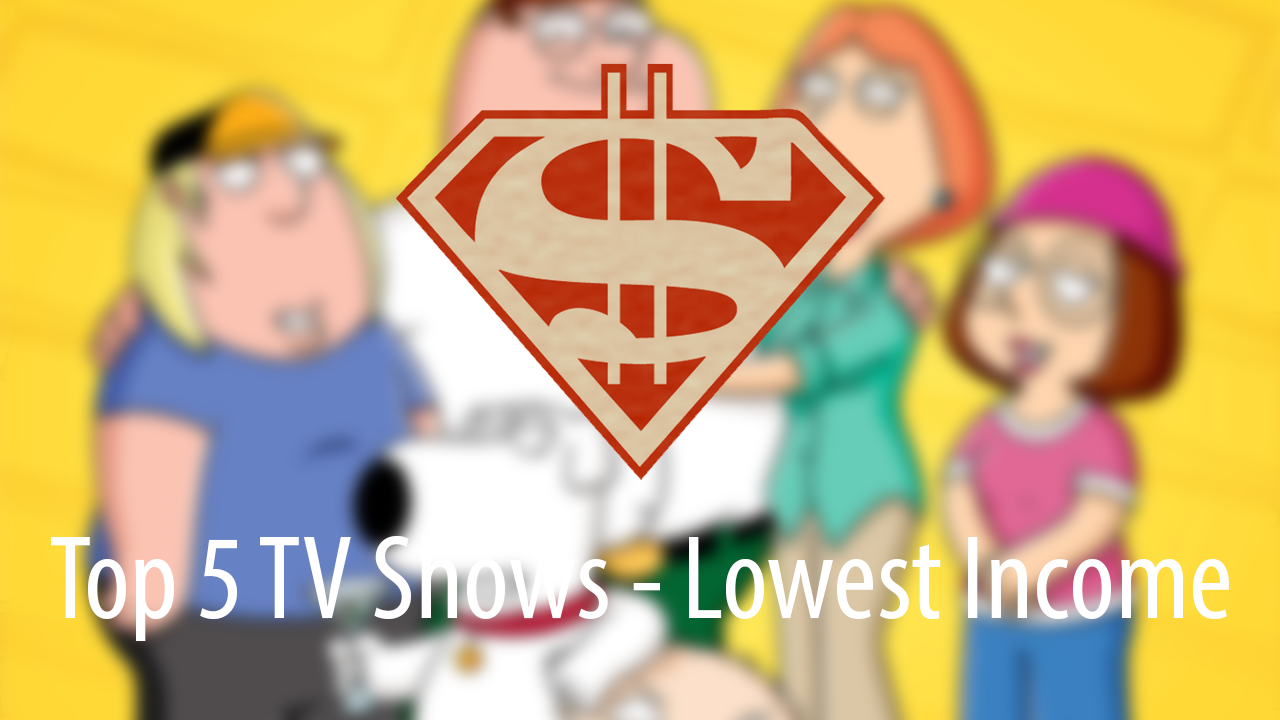 Top 5 TV shows with viewers with the lowest income

The following data shows the average income of viewers of a particular TV show, ranked lowest to highest. The TV shows are the ones with the lowest average viewer income.

Bob’s Burgers focuses on the Belcher Family, consisting of Bob (father) – played by H Jon Benjamin (Suburgatory and New York Minuit), Linda (mother) – played by John Roberts (also been in Good day New York), Tina (Dan Mintz, also been in Adventure Time), Gene (stand up comedian Eugene Mirman) and Louise (Kristen Schaal, also been in Modern Family and American Dad). Bob owns a burger shop and sells arguably the best burgers in the world, much better than his rivals – Jimmy Pesto. However, Bob’s children are less than helpful when it comes to selling the burgers, and thus more customers go to Jimmy Pesto’s restaurant instead.

It is written by Lauren Bouchard (Dr Katz, professional Therapist), and in every episode an escapade takes place. It’s got typical slapstick humor and focuses primarily on the quirkiness of the characters. There are currently 4 seasons and 67 episodes in total. First aired in 2009.

American Dad is about the adventure of Stan Smith (Seth MacFarlane – see below), a CIA agent. However, the spotlight is sometime shone upon his family, Francine (Wendy Schaal – Six feet under) his uneducated housewife, Haley (Rachael MacFarlane, Seth’s sister. She’s been in Robot Chicken) his republican hippy of a daughter, Steve (Scott Grimes – Robin Hood) his wimpy son or Rodger (Seth MacFarlane), the eccentric alien who lives in make believe in their attic. Hailey is also married to Jeff Fischer (Jeff Fischer – Tony Hawk’s Underground) – a drugged up dead beat push over who varies from living in his van to living in Stan’s house. It can also be shone on his outrageous co-workers such as his boss, Avery Bullock who not only looks like Patrick Stewart, but is also played by Patrick Stewart. They also have a fish with a German man’s brain trapped inside its body (Dee Bradley Baker – Space Jam), who wishes he was involved in the story more but isn’t.

The series is written by Seth MacFarlane (Ted, A Million Ways to Die in the West, Ace Ventura Pet Detective, Dexter’s Lab, etc), and manly focuses on random  shenanigans.  The humour is mainly based on farces, there has currently been 10 season and 172 episodes in total. First aired in 2005.

Family Guy is yet another cartoon comedy written by Seth MacFarlane (see American Dad). It is much less patriotic than American Dad and it’s humour is much more socially based, be it mocking celebrities, slapstick comedy or just the outrageous actions of the protagonist Peter Griffin (voiced by Seth MacFarlane), a drunken, overweight, clinically retarded character who has many a career in his day but at present works at a brewery. He is married to Lois (Alex Borstein, also been in Catwoman and A Million Days to Die in the West) – a physically attractive house wife who spends most of her time trying to either control Peter or get away from Peter.

Together they have three children, Meg (Mila Kunis – been in Ted and Friends with Benefits) – the eldest child and the only daughter who everyone seems to put down simply because they care very little for her existence, Chris (Seth Green, been in Robot Chicken and Austin Powers) – the eldest son who much like is father is fat. Not only is he on the uneducated side but he also likes hot girls even though he can’t speak to them and attracts paedophiles. Then there is Stewie (Seth MacFarlane). Although he is still a baby, he is a secret evil genius. They have a dog called Brian (Seth MacFarlane), an intellectual who considers himself a superb writer even though he’s only written two books and no one bought one of them, and the other one was meant to be trash.

It has a wide variety of recurring characters, be it celebrities such as James Woods (White House Down, Stuart Little 2) or Adam West (Batman), or be it regular Joe’s such as Glenn Quagmire (Seth MacFarlane) or Joe Swanson (Patrick Warburton). Based on another TV series called Life of Larry and it’s sequel Larry and Steve, again, by Seth MacFarlane which is pretty much starring Peter Griffin and Brian Griffin, Family Guy first aired in 1999 but took a two year break in 2004 till 2005, due to poor ratings as Fox were inconsistent as to when the series would be aired, and kept moving the times around without warning the audience. However, it is still running today and has at present 12 seasons and a total of  231 episodes, excluding movies.

48 hours, at one time called 48 hours mystery is a documentary TV series. It takes place all over the US and it’s about police officers doing their jobs and trying to cut down crime. Unlike all the other programs on this list, this is non fictional. It has been running since January 1988 and is still running today. It has a total of 26 seasons and 991 episodes in total to date.

The Simpsons was originally created by newspaper comic writer Matt Groening for a few sketches on a talk show. Matt Groening panicked 15 minutes before he had an interview with the TV producers and changed his cartoon idea from a blue elephant to the Simpson family, all of which are based on his own upbringing. He feared that if the producers hated his cartoon, then his comic featuring the blue elephant would be ruined.

In December 1989 the Simpsons got their own TV season,  starting with the Christmas special. 25 seasons later featuring 552 episodes in total, the Simpsons are still running today with a variety of video games and even a movie about the characters.

The father of the Family is Homer Simpson (Dan Castellaneta – Super 8), a fat, lazy, incompetent and angry man who spends all his time either at work at a nuclear power plant scoffing down donuts and sleeping or with his friends at a bar drinking beer. His wife Marge (Julie Kavner – Click and Someone Like You) is a beautiful and smart blue headed housewife who spends most of her time complaining and talking about the right course of action.

They have three children, the eldest and only boy Bart aged 10 (Nancy Cartwright – Godzilla (1998)), a popular trouble making joker. The eldest daughter being Lisa aged 8 (Yeardley Smith – New Year’s Eve), an academically smart and musically talented young girl, and the youngest being Maggie  aged 2 (played by no one).

The show is an animated sitcom, and debatable on an adult comedy, as it’s shown on TV during the day and aimed at children, however there are still racist, crude and/or homophobic jokes mixed. Youngsters do seem to be oblivious to these jokes though. 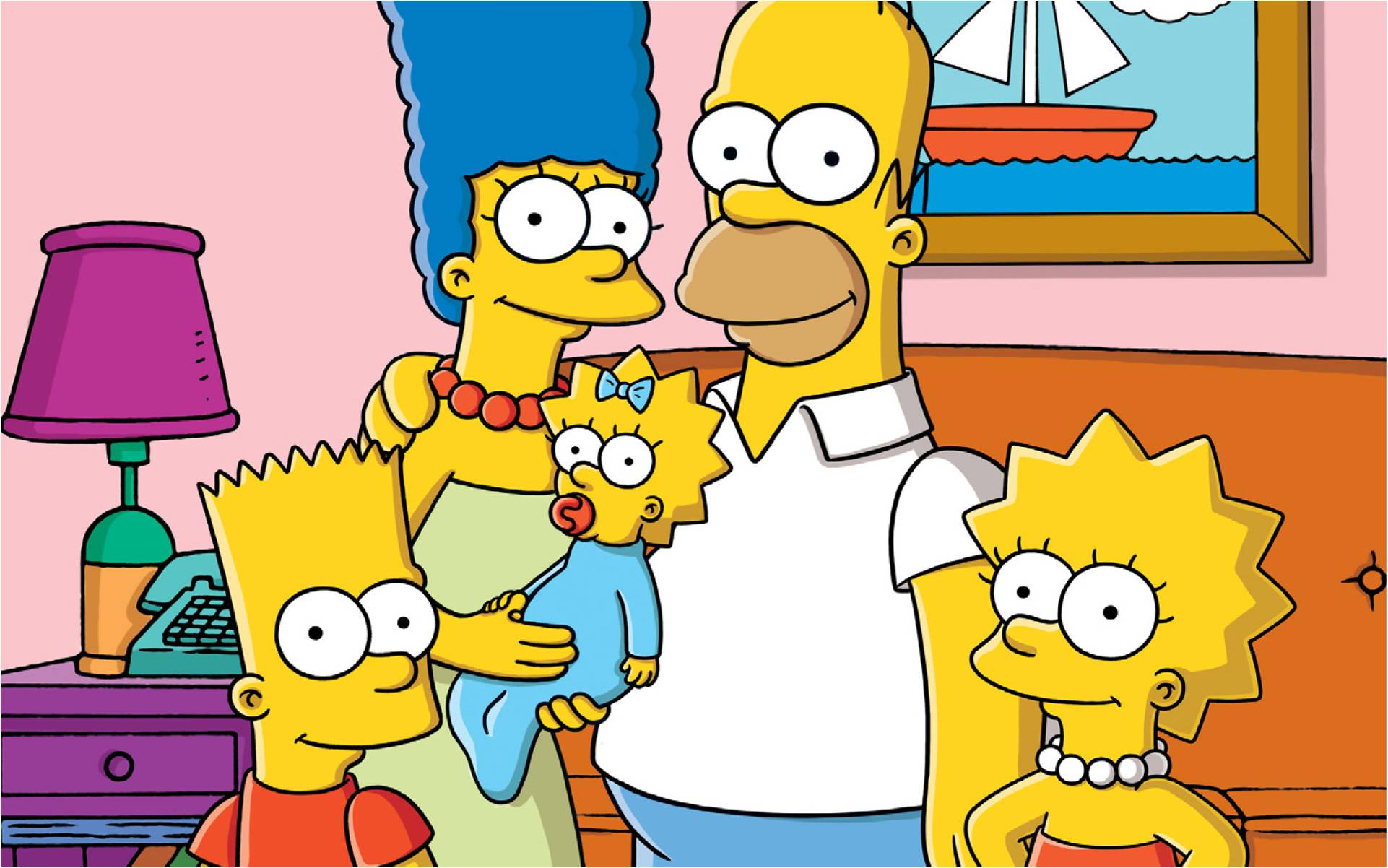 The death of the Simpsons?
1 Comments
Leave a response